Last March, the Choeur philharmonique de Strasbourg (Strasbourg Philharmonic Choir) suspended its rehearsals and cancelled its concerts until further notice because of Covid-19. Though obliged to remain in isolation, we were nevertheless certain that we were not alone: choral singing is as international as the pandemic. So we launched a survey of choirs around the world to share our good ideas and initiatives, our findings and our failures.

Twenty-six conductors or directors of more than sixty choirs answered our call: five professional choirs, twelve symphony choruses, thirteen university choirs, seven high-level vocal ensembles, one parish choir and twenty-four less experienced choirs – from a small ensemble of ten singers to a large chorus with 200 members, spread over four of the five continents: the United States, Canada, Argentina, Brazil and Chile for the Americas; Germany, Spain, Finland, France, Italy, Latvia, the Netherlands, Russia and the United Kingdom for Europe; South Africa for the African continent; and Japan for Asia.

This survey is not a scientific study; it will not answer questions about the danger of the virus for singers; it will not propose a miraculous or definitive solution; nor will it indicate when you will be able to give or listen to concerts again.

The answers to our survey are to be regarded as postcards from every part of a world which, like the virus, transcends geographical borders: that of the love of choral music, of creativity, and of collective pugnacity.

Breaking the thread of time

With the cessation of rehearsals and concerts, the pandemic has broken the thread of time for everyone – at just the wrong time for Blagovest from Riga (Latvia), which was starting its thirtieth-anniversary celebrations. ‘Emergency state due to corona pandemic struck us suddenly and crossed out all our ambitious plans for anniversary season.’

In Cape Town (South Africa), it was a historic break in a fifty-year-old programming tradition: the halt in rehearsals ‘happened just before our annual performances of Handel’s Messiah, which the Philharmonia Choir had an unbroken record of singing at the Cape Town City Hall on Good Friday and Easter Sunday for the past 52 years!’

In this context of an uncertain future, the past takes on the status of a refuge and allows us to be patient. Past projects are evoked while waiting to talk again about projects to come. In Milan (Italy), the Chorus of La Scala has shared an extensive repertory of historical and recent images on social networks and websites.

For choirs, too, the social and economic consequences are important.

The cancellation of rehearsals and concerts has meant the suspension of musical activity for choirs, with the break in the social tie and the economic consequences that this generates. Each choir, according to its profile, has been affected in different ways.  In the professional world, singers and conductors, but many other professions too, have been affected by the suspension of activities, as the Chorus of the Teatro Massimo in Palermo (Italy) points out: tailors, stagehands, stage managers, librarians and administrative staff among them. Financial compensation (or the lack of it) for the cessation of activity is directly dependent on national policies and varies according to the status of the ensembles. While in Vancouver (Canada), ‘the choir has received considerable support from the Canadian government’, the situation is more difficult for the Symphonischer Chor in Bamberg (Germany), because such arrangements are restricted to orchestras or soloists and not available to choirs. The freelance singers in Tokyo (Japan) are waiting to be employed again by their agency. The salaried conductors of amateur choirs have not escaped these difficulties, suffering in their turn from the policies of each country with regard to the associative choirs that employ them.

National diversities have also been expressed in the way choirs behave in the face of the epidemic. As Tsutomu Matsumura, Director General of the Japan Choral Association in Tokyo (Japan) points out, ‘Here in Japan we have a self-restraint request that has no legal force, but as a national character, we continuously keep a firm self-restraint.’

In this situation, conductors have vied with each to find creative alternatives.

In Paris (France), the American Cathedral Choir has discovered another repertory of duets, trios and quartets for pre-recorded services. In Yekaterinburg (Russia), Khor lyubiteley peniya recorded D. Tukhmanov’s song ‘Victory Day’ – a song celebrating the end of the Second World War, chosen for its powerful symbolism.

In Bamberg (Germany) the Symphonischer Chor has benefited from the scientific survey commissioned by its partner orchestra (Bamberger Symphoniker) from the Freiburg Institute of Musical Medicine, the University Hospital and the Freiburg University of Music, to assess the risk of coronavirus infection in music.

In Madrid (Spain) Jose Mena Polo has organised ‘meetings and attempts at rehearsal’ with his community choirs, and vocal technique sessions and documents on the works in to keep up the choristers’ interest.

In Helsinki (Finland) Noora Hirn, conductor of the Värinä Chamber Choir, has organised ‘a workshop on rhythmic choral music with a specialist in this field, a session with a singing teacher, a theoretical lesson on intonation, (…) regular group rehearsals, (…) a recording of a modern piece, (…) commissioned videos of songs and breathing exercises, and [organised] a workshop to plan the choir’s long-term future goals’.

In Kyoto (Japan) Yusuke Ishihara has created a ‘separate choirs’ Internet group to record Mendelssohn’s lied Abschied vom Walde from a distance –learning about new software and technologies in the process. In Osaka (Japan), Hideki Motoyama launched a Facebook appeal for a ‘telechorus project’ and scheduled a ‘telechorus festival’.

These resilient experiences have fully expressed solidarity and the spirit of collective responsibility. In Cianorte (Brazil) Nicolás González Martínez suspended rehearsals on 14 March, before the national instructions, out of concern for his choristers. In Santiago (Chile), Karin Friedli underlines the importance of singing for maintaining balance and mental health in isolation. In Strasbourg (France), we launched this questionnaire for other choirs in order to share our experiences.

Although, like Aleksandrs Brandavs from Riga (Latvia), many conductors are delighted to have had a more individualised contact with their choir members, all of them also point out the limits of these digital experiments: difficulties related to the digital divide, as mentioned by Emiliano Flores from San Miguel de Tucumán (Argentina); unequal distribution of Internet services and inconsistent connection capacities from one territory to another; uneven quality of equipment and mastery of computer tools among choir members. And musical difficulties too, as Valérie Fayet, chorus director of the Orchestre National des Pays de la Loire in Nantes (France) observes: ‘To “make music” together when there are seventy of you is no longer possible. I find it hard to imagine everyone at home with earphones. For me it’s better than doing nothing at all, but it’s not music. It’s just a technological experience.’ Olga Doubovskaya in Moscow (Russia), noting the same musical difficulties, comes to a subdued conclusion: ‘The most important thing, as always in a choir, is the collective approach.’

What happens when we start up again ?

In terms of when and how they will restart their activities, too, choirs are subject to government choices; and these varying perspectives allow (or don’t allow) each of them to project themselves into the post-Covid-19 era.  This is how Simon Halsey from London (England), who also conducts choirs in Birmingham (England) and Barcelona (Spain), puts it: ‘The UK is running very late in this crisis. But starting tomorrow, I’ll begin to build a plan to restart with sectionals and octets – exactly as they are already doing in Berlin. But whether we have any concerts to aim for, I don’t know. I expect Barcelona to begin sooner than the UK.’ No plans for Eduardo López Cabello and his three choirs from Leeuwarden, Blokker and Amsterdam (Netherlands) either: ‘No, none of the choirs has a fixed plan to physically resume rehearsals, because the government is not yet clear when the rules will be made less strict.’ Whereas the Kampin Laulu choir in Helsinki (Finland) will resume rehearsals this June, Felipe Ramos in Vitacura (Chile) is waiting: ‘We are very dependent on the institutions, so when they decide to open their doors, we’ll come back with all our energy!’ John Warren in Syracuse (USA), will be waiting for the academic year to resume, but he is not sure if the usual number of students will be allowed: ‘I am not sure there is space available where 120 people can rehearse in a useful way being that far apart. So far the orchestra has cancelled all spring concerts and we are discussing alternatives for the fall.’ In any case, here again, the actors of the choral world display a realistic yet buoyant optimism, as Pascale Verdier, conductor of the Chœur de l’Orchestre de Pau – Pays de Béarn in Pau (France) testifies: ‘We’ll see in September if our functioning can be (must be) shaken up, modified, improved… but in any case: HAUT LES CHŒURS!’

A choral world transformed by the pandemic ?

These postcards express the cultural and musical richness of the choral world, but also, reading between the lines, the diversity of its challenges – and as a predominant thread, the resilience of its protagonists and their formidable potential for optimism. Did it take this epidemic to make us so aware of this? What will be the ‘aftermath’ for our activity, which has been so badly affected? Here as elsewhere, this episode will certainly bring about transformations. Nevertheless, it is possible to be convinced without a shadow of a doubt, from reading these testimonies, that this forced halt will continue to inspire conductors and choristers around the world – as Elizabeth MacIsaac, conductor of the Ensemble Laude Choral Society in Victoria (Canada), puts it:

‘When a field is left fallow for a year, it is in order to allow it to become more fertile again, to replenish its nutrients. When something is left dormant for awhile, it is an opportunity to dream new ideas, to rejuvenate, to move in directions which there was no energy and time for before, to reassess, to decide what crop would be good to plant next. The farmers, here, are us.’

A survey conducted by the Strasbourg Philharmonic Choir 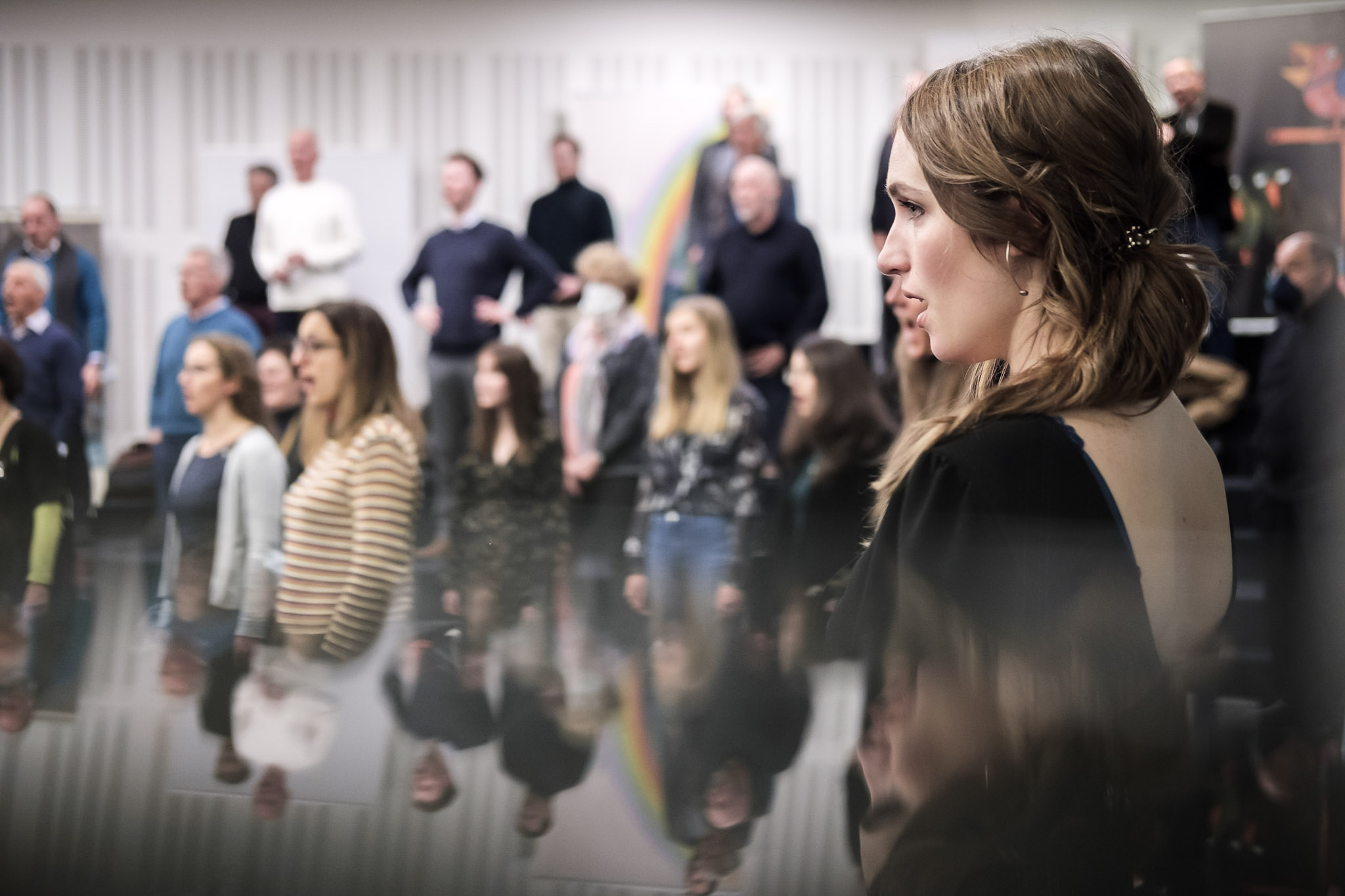 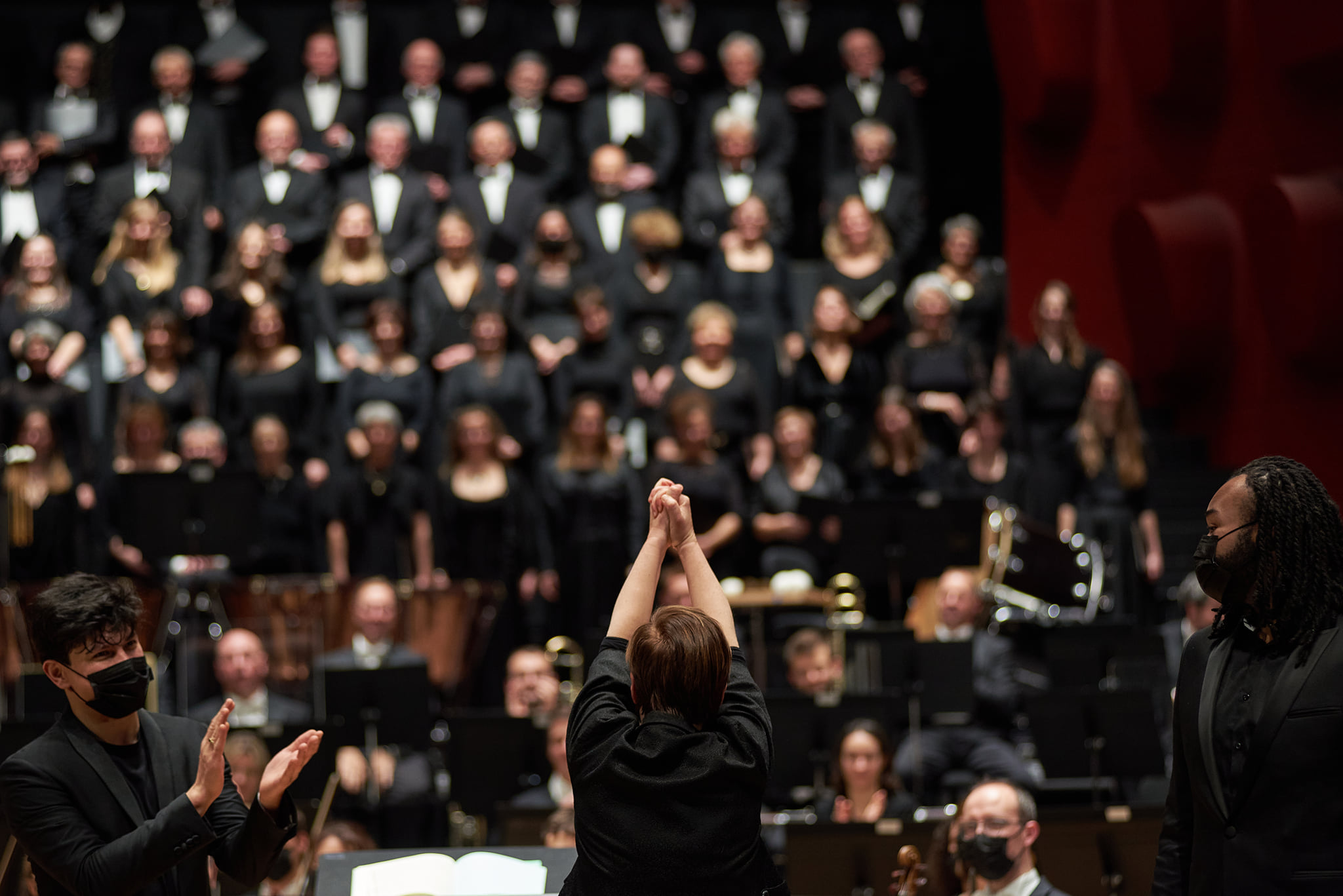 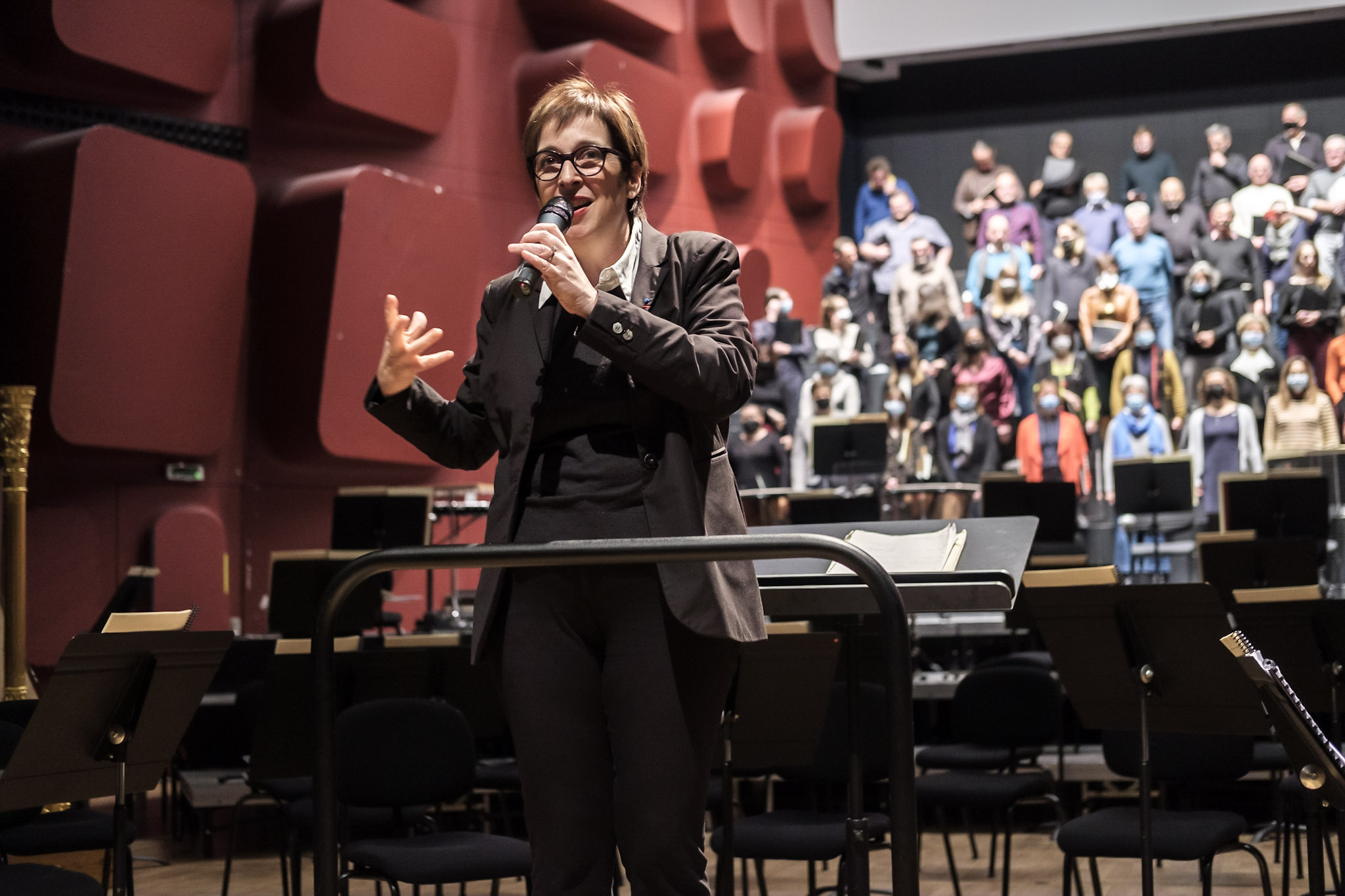 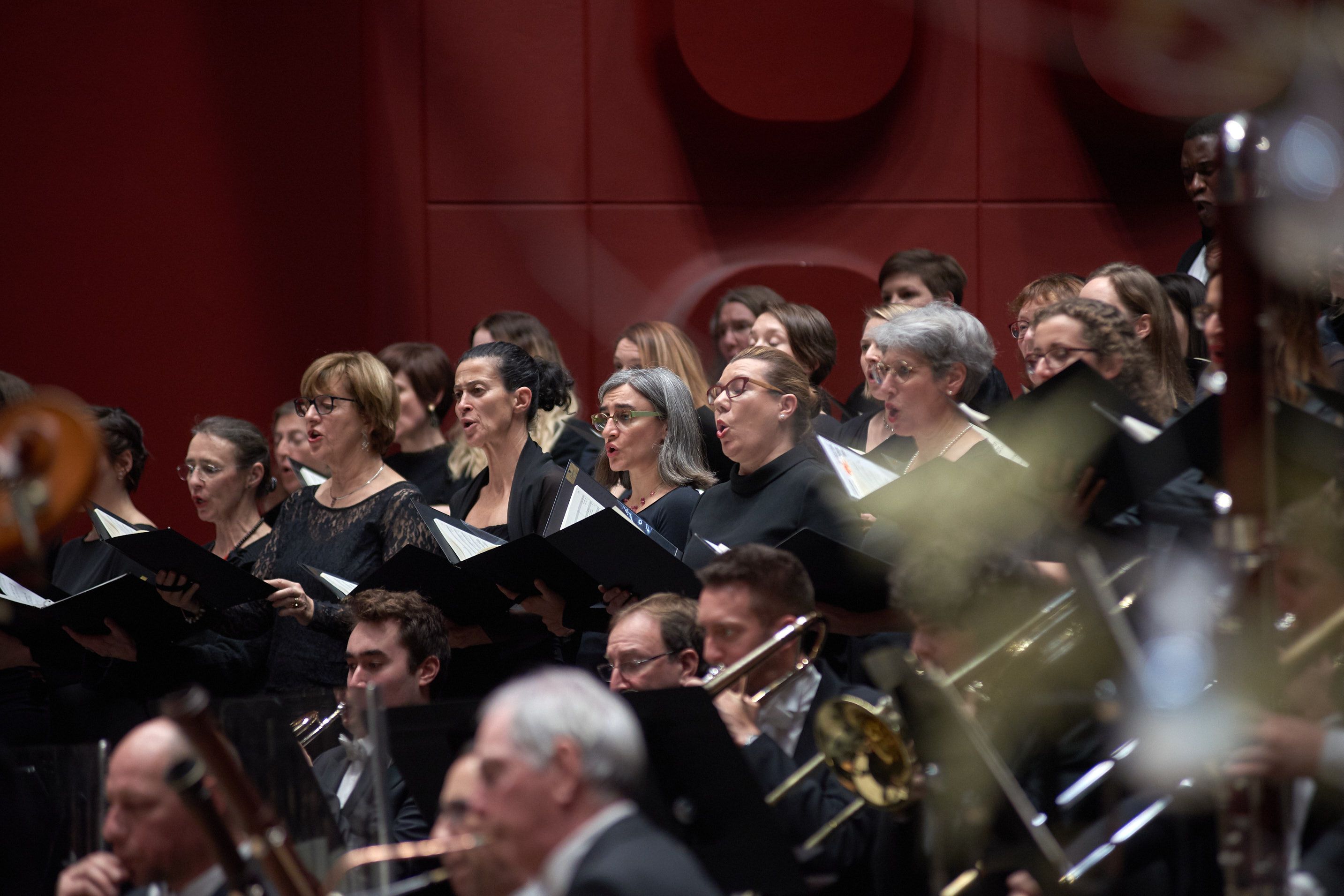 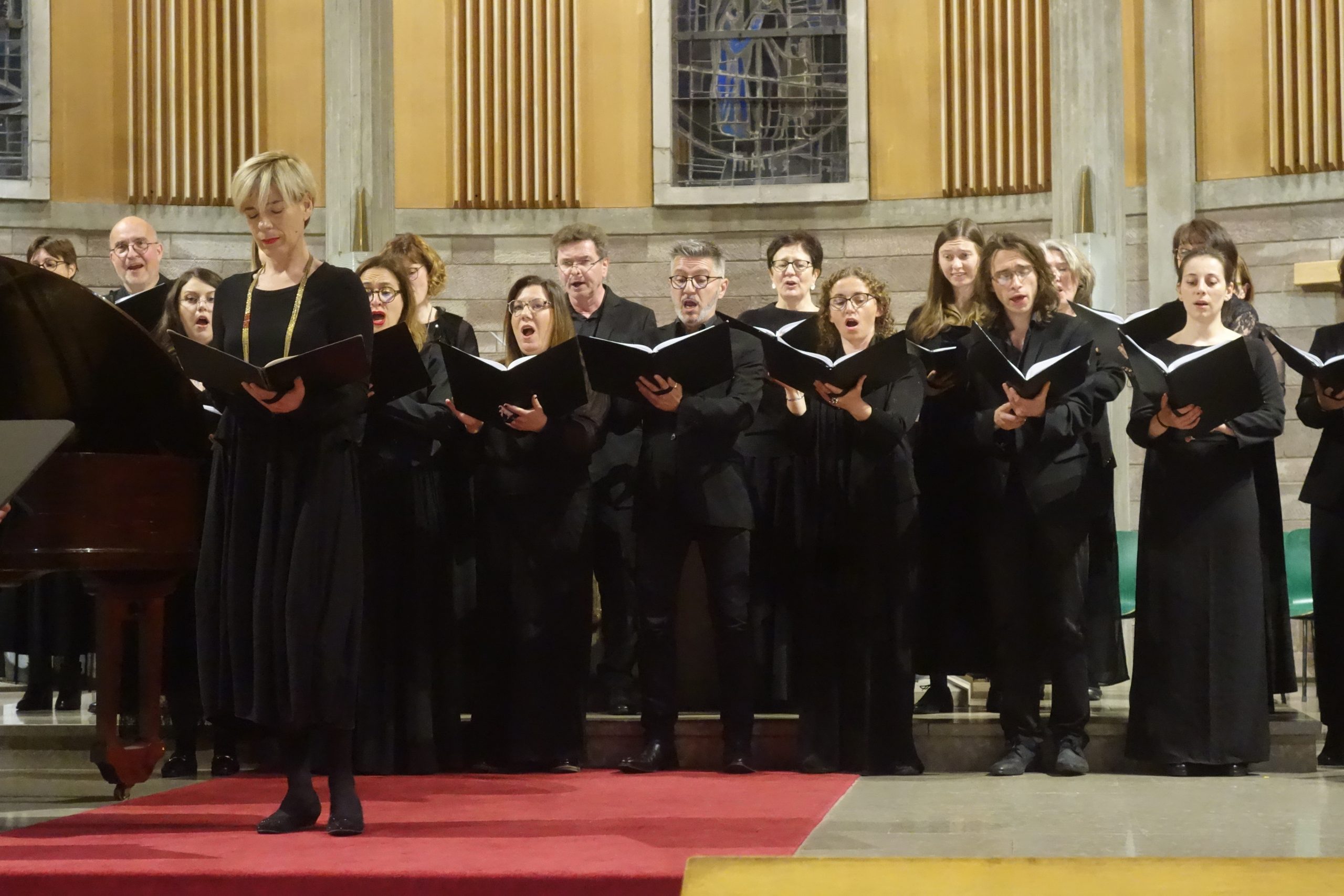